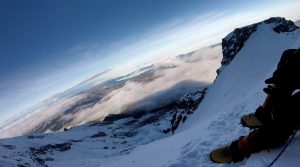 Last Sunday 24th of October 2021, 15 climbers attempted to reach the summit of Mt. Chimborazo, the highest peak in Ecuador, when an avalanche triggered a tragedy trapping 9 independent climbers, killing 6.

Events prior to the Avalanche.

The week from the 14th – 13th of October – the Chimborazo region had a lot of unusual storms, with heavy rain, and also heavy snow (above 5000 m line) inclusively electric storms appeared from Thursday till Sunday almost every night.

We as a company had attempted the Chimborazo summit on the night of the 23rd of October, with 3 clients, and 2 guides, at 5400m our guides, found the conditions of the mountain were not the best, and the heavy snow, had made the rout dangerous, due to loose snow, and plate building.

At the same time, on the 23rd late afternoon 15 climbers registered as independent mountaineers and pushed their way into the high-camp located at 5300m, unaware of the conditions of the mountain the night prior.

As independent climbers, they had decided not to hire a certified guide for attacking the summit.

What triggered the avalanche?

We believe that the amateur climbers did not read well the conditions of the snow, and plates, and had decided to attempt the climb, given the temporary weather window, which lasted for 12 hours, starting at 2 am. a clear night may have encouraged them to try the summit

6 of the climbers decided to turn round at the “via Ferrata” after understanding that they had no conditions to continue, and 9 pushed to the summit.

We understand that at approximately 6 am at and when the leading group reached 6100 m, the plates gave in and triggered a huge avalanche trapping 3 teams (3 climbers in each rope).

The avalanche was a massive fall of loose snow, along the northwestern face of Chimborazo, and descending all the way to 5100 m in an inaccessible part of the mountain, killing immediately 6 of the 9 climbers.

The toll of the tragedy turned out like so:

The High-camp team, made the call of help at exactly 6 am, rescue teams from the police, fireman, and military special forces were called upon the vent, as well as any mountain guide close to Chimborazo or near the area.

Paul H. One of our team members (who had climbed the night before, and had advised colleagues against any try) happened to be trekking with his family, the same morning of the events, and was able to assist and help 3 of the survivors, he was able to capture the picture above, where it clearly shows, the downfall of the avalanche all the way from almost the Vintimilla summit.

The Ecuador Eco Aventure team, also assisted voluntarily with supplies and logistics to help with the search of the missing people as soon as possible, however bad weather conditions, made the rescue team quit the search at 4 pm.

This unfortunate incident saddened us all, and the mountaineering family of Ecuador, may they rest in peace.